IND_040417_239_x
Peter Menzel photographing at Manikarnika Ghat on the Ganges River in Varanasi India. The Bodies arrive day and night from far and near to be cremated at Jalasi Ghat, the cremation grounds at Manikarnika Ghat. One hundred or more times a day male family members carry a loved one’s body through the narrow streets on a bamboo litter to the Ganges River shore—a place of pilgrimage for Hindus during life, and at death. Not every Hindu can be cremated here, because of transportation costs and logistical considerations. Sometimes a body is burned in one location and the ashes brought to Varanasi. There are other rivers in India, such as the Shipra which flows through the sacred city of Ujjain, that are considered sacred as well, but none holds the importance of the Ganges. Sometimes a small dummy representing the person will be burned at Jalasi.
Only male family members are present and tend to the bodies at the cremation site as no show of emotion is allowed and also, they don’t want any of them jumping onto the fire, says one manager at the ghat. The body is carried to the water’s edge for a last dip, and then the main mourner prepares for his role in the ritual burning.
The main mourner—usually the eldest son or closest male family member’s hair and facial hair is shorn, and his nails are cut. He wears a simple dhoti (traditional Indian male’s wraparound clothing). The chief mourner follows a prescribed ritual, which involves circling the body and showering it with ghee (clarified butter) and incense—like sandalwood—again often purchased from one of the local funereal accessories vendors. It takes about three hours for an average sized body to burn completely. If a family is poor and doesn’t have enough money to buy the right amount of wood to burn the body, then wood left over from other fires might be used. It takes about 350 kilos of wood to burn a body completely.
Afterward, the workers dump ashes from the burned pyres and douse 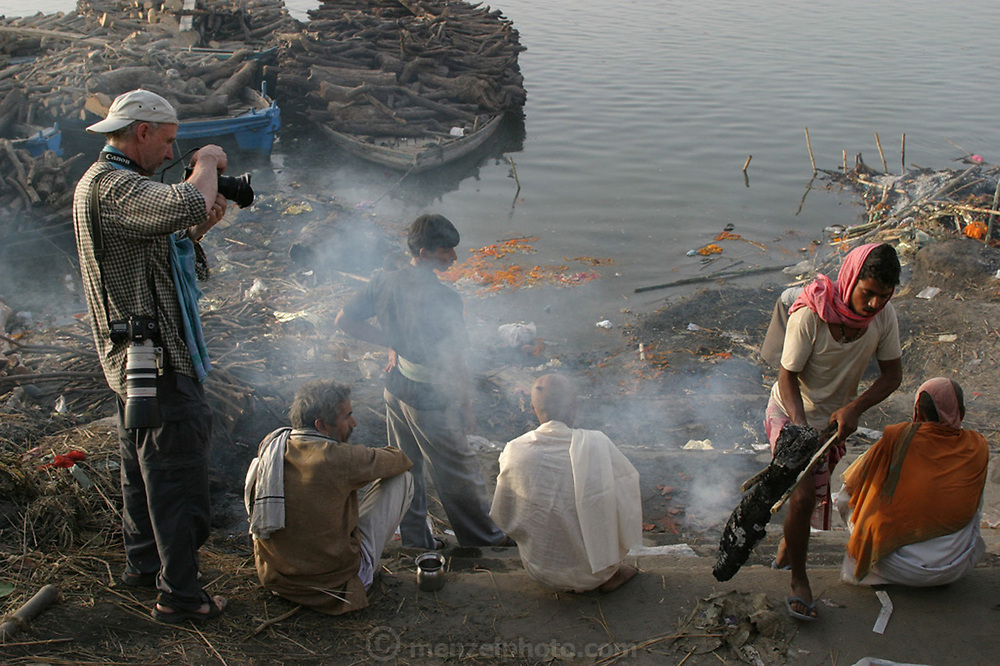