USA The Long Haul Trucker.Conrad Tolby, an American long-distance truck driver, photographed with a typical day's worth of food on the cab hood of his semi tractor trailer at the Flying J truck stop in Effingham, Illinois. The caloric value of his meals this working weekday was 5,400 kcals. At the time of the photograph Tolby was 54 years of age; 6 feet, 2 inches tall; and weighed 260 pounds. His meals on the road haven't changed much over the years?truck stop and fast-food fare, heavy on the grease?despite warnings from his doctor. He has more reason than most to watch his diet, as he's suffered two heart attacks?both in the cab of his truck. The trucker travels with his best friend and constant companion, a five-year-old shar pei dog, named Imperial Fancy Pants, who gets his own McDonald's burger and splits the fries with Conrad. From the book What I Eat: Around the World in 80 Diets. (Please note that the calorie total is not a daily caloric average. See his chapter, and the methodology, in the book for more information). MODEL RELEASED...Note: The authors used a typical recent day as a starting point for their interviews with 80 people in 30 countries. They specifically chose not to cover daily caloric averages, as they wanted to include some extreme examples of eating, like one woman's diet on a bingeing day or the small number of calories a herder in Kenya ate during extreme drought. The texts in the book provide the context for the photographs, detailing each person's diet, culture, and circumstance at the moment they were photographed: a snapshot in time. A complete methodology is available in the book. 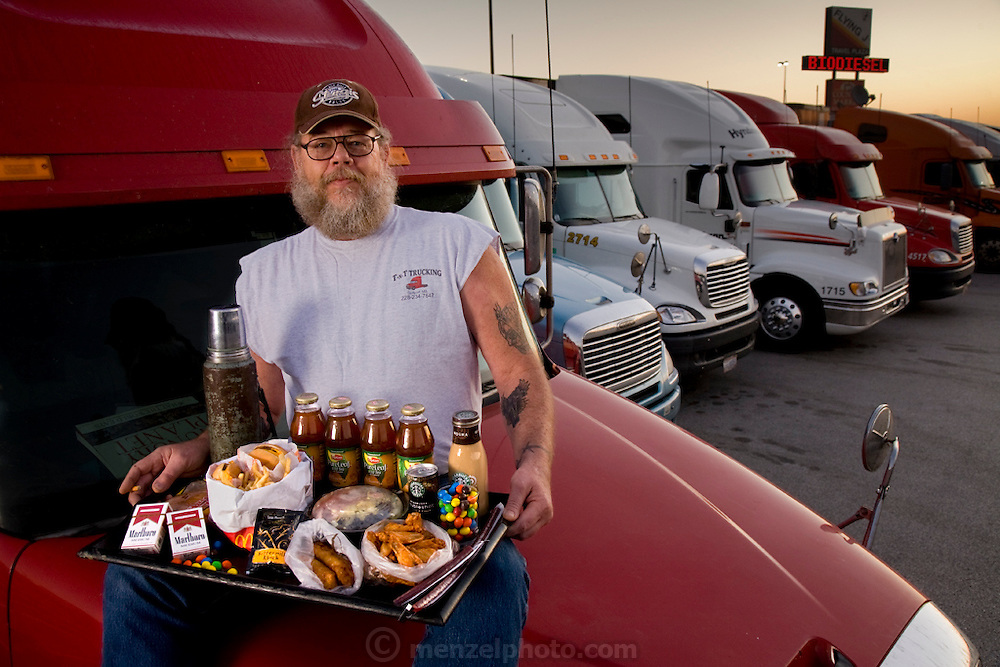